When Diamond Head released their self titled comeback in 2016, it was a major success. Not only was the album received with praise, partially bringing the band back to their roots, but it also brought them back into relevance in the metal world. As soon as it hit, the band went on a massive touring spree where I was lucky to see them twice on. However, I was really curious about where they would go from here as their self titled really was homing in on the classic DH sound with some touches of progression here and there. “How could this sound eventually mature?” I really wondered. Well their next album entitled The Coffin Train is finally here to show exactly where they ended up.

The album opens thunderously with the furious banger “Belly Of The Beast” which is a logical continuation of the 2016 album. This song is a total callback to their NWOBHM heydays or at least Tatlers since he is the sole original member. Rasmus’ voice sounds honestly even better on this album overall and this song shows how much more comfortable he has gotten being the new and my personal favorite voice of the band. It is almost too strong of an opener with the band giving it all they’ve got. Up next is another heavy number entitled “The Messenger” with a nice build into a heavy main riff that really sets a good groove. The chorus on this song is also really catchy. The title track definitely shows the proggier elements the band hinted to on songs in the past with a build to an epic end that I really like. The next two tracks “Shades Of Black” and “The Sleeper” are structured in a similar way showing this more dark and almost grungier sound the band is going for akin to a band like Soundgarden. It almost is a 180 turnaround from the last release which may put some hardcore fans off. However it works in the bands favor as it doesn’t show them do the same album twice and keeps things fresh. Speaking of the track “The Sleeper”, it is definitely one of the highlights in the middle part of the album with a very nice structure containing this orchestral backing that really beefs up the sound. It eventually ends in an explosion of fiery fretwork by Mr. Tatler which never gets old. Up next is another callback tune entitled “Death By Design” and is another absolute banger with that catchy chorus as well as simpler yet always solid riffing. “Serrated Love” is next and gives us a little bit of more foot stomping hard rock that has a bit more of a modern sound to it but still works pretty well. Up next is “The Phoenix” which definitely is another hard hitter with some nice acoustics opening the song. I really like how this song chugs along with Rasmus having this almost distortion to his voice it really works for this heavy grooving tune. Finally we end with “Until We Burn” which is a softer tune but still definitely fits in with the overall more modernized darker sound on the album. It is a fitting end to the album and definitely has a good feel to it.

Overall, This album while not being a typical Diamond Head album, is still pretty damn good. The band adds a darker and more complex rhythm based formula here that I feel works for what they were going for. It has it’s moments that may remind fans of the classic “Lightning Of The Nations” sound but definitely an overall package you have to go into with more of an open mind. It is definitely heavy and shows a solid core of musicians writing a solid collection of songs that won’t leave my stereo anytime soon, but don’t expect a nostalgia ride, this is definitely Diamond Head on a different level and I really enjoy it. Highly recommended. 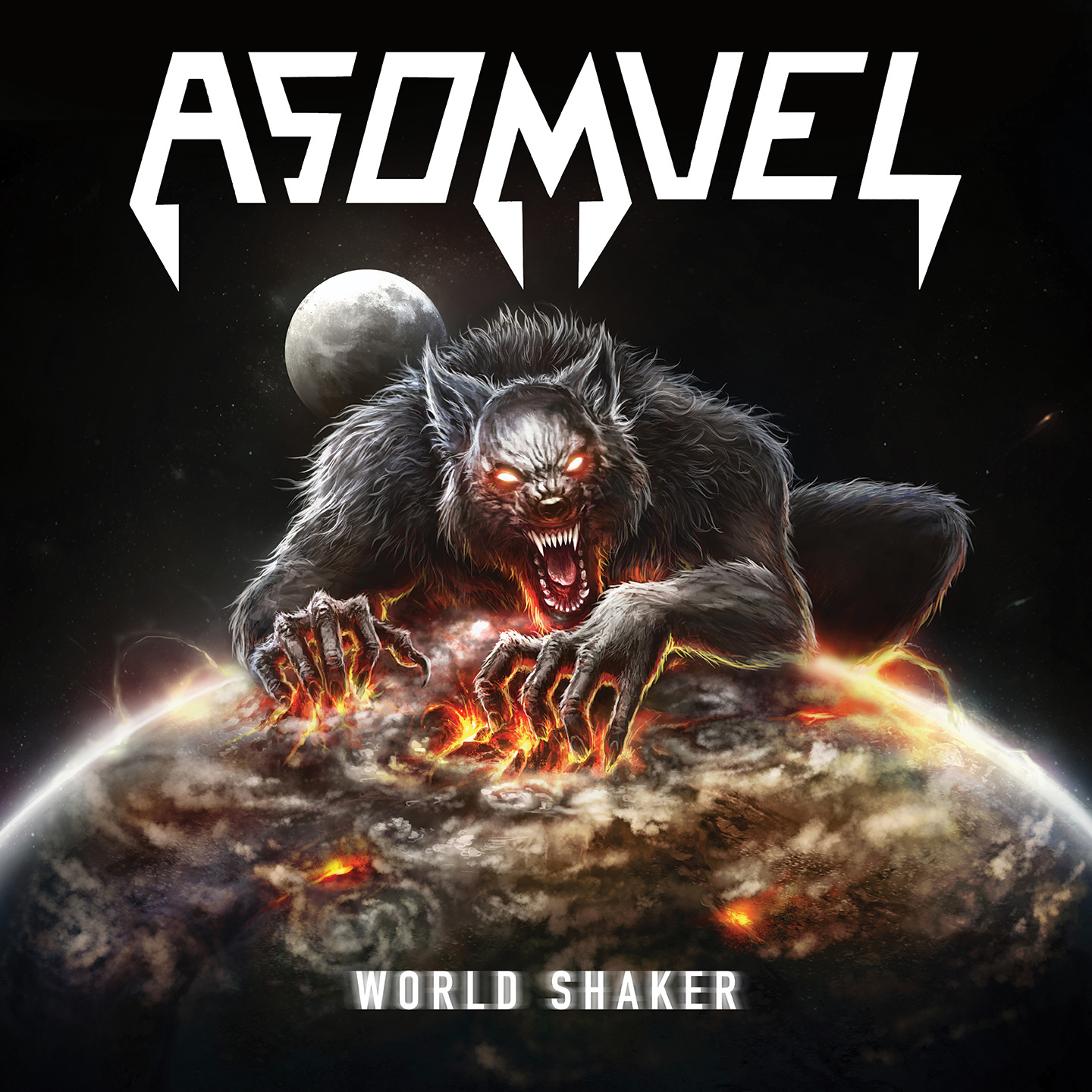 Here is an album I have been anticipating for awhile. For those who are not familiar with Asomvel, they are a trio that are true to their roots as a straight to the point classic Heavy Metal group. Their sound is rooted mainly in Motorhead all the way to the distorted Rickenbacker bass lines and growling vocals. However, with their sound so reminiscent of classic acts, can they hold up on their own? Now the album “Knuckle Duster” they released some years ago was damn good and a very fun album but I felt the production was just a tad flat in parts and the vocals just felt a bit off to me as well. However, with “Worldshaker”, the band forges on with the Nephew of original front man Jay Jay Winter at the front of the band and this album I have to say is pretty damn fun.

Now what makes this album to me an improvement over “Knuckle Duster” is firstly that the production seems a bit more lively. The bass really takes over and but still meshes well with the guitar lines. Even thought the Motorhead sound is even heavier here, it still works as the song quality is very tight. We have break neck speed tunes such as the title track, “Runnin The Gauntlet” and “Every Dog Has It’s Day” to songs that are locked in solid grooves like “PayBack’s A Bitch”, “Reap The Whirlwind” and the generic but straight to the point titled “The Law Is The Law”. However, for me personally the best song here is “The Nightmare Ain’t Over” which is one of the catchiest tunes and ends the album with everything it’s got.

While this album is everything but original, it hits you square in the face with a solid selection of songs that are straight, simple hard rock n roll. Asomvel to me are very much how Airbourne are in the spirit of keeping that Hard Rock sound alive and this record definitely exemplifies that for showing that the old school still has a place in 2019. “Worldshaker” comes out May 3rd through Heavy Psych Sounds. Check it out! 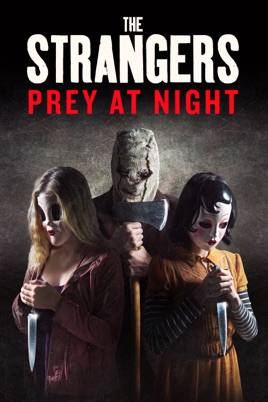 Slashers in the modern era and mainly in the mainstream are very far and few in between compared to their heyday in the early to mid-1980’s. Now granted we do have some mainly from the indie market such as “Terrifier”, “The Barn” and others to satisfy our urge for the classic slashers we grew to love. However the more mainstream market besides the major hit with “Halloween” last year has not had a huge market for these films. But luckily we did get a major released slasher in the form of “The Strangers-Prey at Night” last year which is a sequel to the 2007 film “The Strangers”. Now I am a huge fan of the first film and how it managed to use a good deal of suspense and had a likable cast as well as killers that I always wanted to see more of. Well after a long, long time we finally get a sequel!

I will say right away I love this film. I was unfortunate to miss it in theaters but when I picked it up on blu ray, I was told to take it with a heavy grain of salt. I was essentially told over and over that the serious tone of the first film was pretty much butchered for a cut and paste type movie. However, I went into it with an open mind and just by going through the opening credits blasting “Kids In America”, I could already feel this was going to be a bit more of a tongue in cheek kind of movie….and I couldn’t be any more right. Where the first film was more of a 70’s-esque home invasion film, the sequel goes straight for the 80’s slasher formula which makes for a fun time. The characters while not as memorable do their parts very well and final girl Bailee Madison who plays “Kinsey” at first I was not fond of her character, it felt very forced. But after multiple watches she definitely fits the part and has some badass scenes towards the end. Her brother played by Lewis Pullman I really enjoyed and had probably the best scene in the film where he gets to fight back against two of the masked assailants gaining the upper hand on one only to be outed by the Man in the mask. It is a great scene filled with 80’s pop music blaring which almost adds the unsettling feeling to the whole situation. Now story wise it is pretty standard but it works. It follows a slightly dysfunctional family visiting an aunt and uncle at a trailer park during the off season which means no one’s there. Its spooky and creepy and essentially it’s a perfect place for our three slashers to be staking out and the family must fight for their survival cut print and on we go etc.. While the plot is bare bones, it is how the film is handled that works. With some great tense moments especially toward the end and the 80’s pop soundtrack it all works well to create a fun throwback film. There are also a lot of homages it seems to films like “Christine”, “The Texas Chainsaw Massacre” and every time I watch, it is more enjoyable to notice them more and more.

Overall, I feel this film is much more enjoyable than the first in sense of just being a fun slasher that doesn’t take itself too seriously. It feels slightly like Chainsaw part 2 in the sense of not trying to outdo the grittiness of the original but the take that world and make it a lot more fun which horror to me has always been about: a fun, blood splattered time. Highly Recommended!