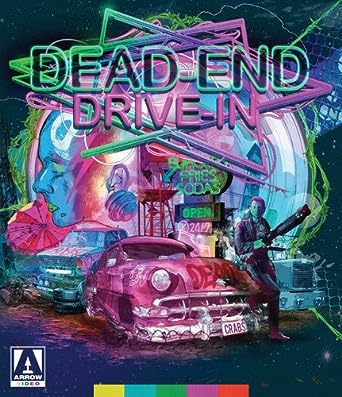 Post-apocalyptic films are personally one of my favorite genres of film that has ever hit the silver screen all the way to vhs tapes to blu ray and beyond. Australia in particular, seem to have a cornered market on these types of films with creating perhaps the most iconic and my favorite action franchise of all time, “Mad Max”. However there are some interesting less talked about Ozploitation action films that came from this time such as “Road Games” and the subject of today’s review, the neon splattered new wave drenched “Dead End Drive-In”.

Released in 1986 by New World Pictures and directed by Brian Trenchard-Smith, “Dead End Drive-In” is definitely one of the most unique post-apocalyptic films I have seen. Set in the “not so distant future” like many of these kinds of movies, we see that society is breaking down (of course) and has adopted mainly a free for all kind of lifestyle. Cars have become a hot ticket as anyone is looking for car wrecks that happen on the roads so they are able to claim the wrecked parts for salvaging. Right away this film feels very colorful with the world we have been put into. With the gangs that ride the highways to the locations and colors used in the film, it definitely bleeds that 80’s style. Our main character Jimmy “Crabs” played by a very charismatic Ned Manning is looking to take his girlfriend Carmen played by Natalie McCurry(R.I.P) to the local Star drive in for your run of the mill teenage date night. While getting hot in Crabs’ brothers 57 Chevy (which doesn’t get nearly enough screen time), the tires are stolen and as Crabs goes to the office to file a report, he finds out the real truth behind the drive in: there is no leaving. Essentially drive ins have been converted into concentration style camps for the undesirables of society and Crabs inadvertently got caught in the trap. The rest of the running time shows Crabs will to survive and escape as everyone else pretty much sees it as an easy way of life for them. Even his girlfriend has adapted to the life and is even brainwashed to feel as though the Asian immigrants that have also been transported here are the cause of the world’s problems. When this element was introduced in the plot, I realized how much social commentary was really laid on in this film and done with a lot of thought in mind. The racist gangs present and the theme of bigotry throughout the camp slowly comes out toward the last half hour or so in the film and is when Crabs realizes he cannot be blinded by everyone here. What results is a fantastic action sequence with some tense moments and one bombastic ending that had me grinning like an idiot. The action sequences in this film are fantastically done with some good explosions and one hell of a jump at the end. Another thing to note is the exceptional acting by just about everyone in the film. While Crabs seems the most level headed, everyone else plays very outlandish and cartoony distorted wackos that fit perfectly in this film but never come off as cheesy and annoying.

Overall, with some very exceptional and charismatic acting, style and charm that can be rarely matched by even the time period it was conceived in and the interesting take it has on the Post-Apocalyptic sub-genre, “Dead End Drive In” definitely is a gem that needs to be rediscovered and the newer Arrow Video blu ray is definitely the way to go with a bunch of loaded extras and a very sharp picture and exceptional sound quality. Very highly recommended.