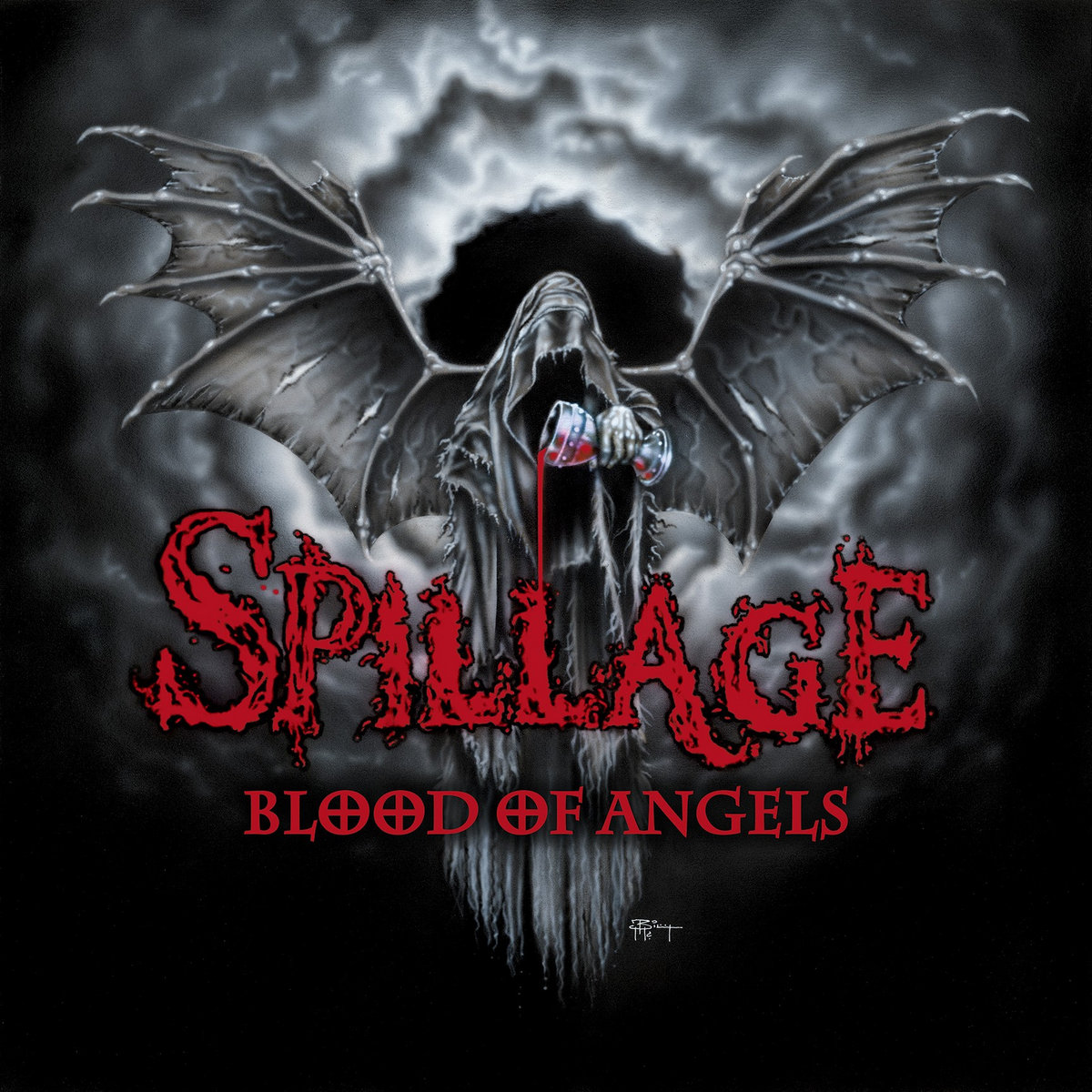 Spillage, Chicago’s hottest Doom Metal group at least in my eyes are finally back! Oh how I have been looking forward to this release ever since I heard the first album a few years ago. With their self titled debut filled with endless grooves, heavy as molasses riffs and memorable songs, their sophomore output had a lot to live up to for me. While I wanted the group to keep their core sound in tact, they needed to add to it in both production and musicianship. Now with a very stable lineup finally intact, Spillage have returned with “Blood Of Angels”!

Opening the album similarly as the first, is the title track with the Organs adding a more almost theatrical feel here with intense layering and atmosphere that really engulfs the listener. This track overall is a very mid-paced groove heavy track that pretty much just shows Spillage have returned and are slicker and heavier than ever. I know before I have stated how present a very almost Alice In Chains sound the band has and new vocalist Elvin Rodriguez has brought that sound even more with the grit and soul that adds more emotion to these songs and it really works. While the opener is a nice slab of Doom, the major highlight comes with the next one two punch of the tracks “Living In Hell” and “Free Man” barreling in one after another. Both tracks feature insanely infections riffs especially through the verses and speed up towards the end adding a real solid aggression with the band going into full jam mode. Especially with “Free Man”, their is definitely a progression in the songwriting here with the band going into more straight forward Heavy Metal territory and it works terrifically. Now the next song “Rough Grooved Surface” is the only song that is a bit of a let down for me. The lyrics basically an ode to vinyl are a bit cheesy and don’t fit a lot of the album and is a track that feels more I suppose gimmicky than the others. The album does pick back up with “Disappear” with a nice solid bass groove throughout and a killer intense mid section again. I also like the vocals on here they almost have a psychedelic feel. Evil Doers continues with the bands self proclaimed “Power Doom” sound with the vocals having some Gothic undertones to them and is another home run track. Eyes Of A Snake has a nice bluesy groove to it as well and sticks with the bands familiar formula and has some nice dueling riffs from Nick and Tony with synths backing them up. It shows how much more solid the band has become. Voice Of Reason is a nice dark ballad to round out the album with a solid brooding yet beautiful atmosphere and definitely shows of some seventies Scorpion influence as well. The other thing to note is there is a bonus track of the bands rendition of Black Sabbaths “Dirty Women” that while being a straight forward cover and not over-shining their rendition of “Devil Woman”, it is still a ripper and a nice little surprise at the end.

Overall, besides the minor grip I have with one track, the band are back in full force. You can really tell how Bruce Franklin of Trouble really cared for the production on this album with every instrument given room to breath on every track, showing the real rock solid chemistry behind this fine slab of “Power Doom”.