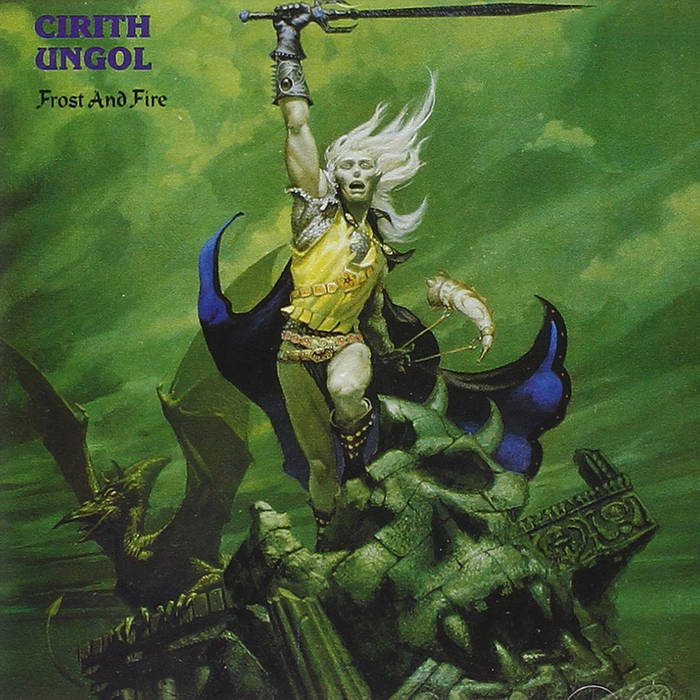 In the late 70’s and early 80’s, Heavy Metal music was becoming one of the biggest exports of rock music mainly thanks to the explosion of of British heavy metal groups making their mark on the world. However, the U.S scene was still brewing hard and fast with band after band sprouting up almost daily across the states. However, one band in Ventura, California would stand out in terms of sound and style from them all. That band was the now cult favorite Cirith Ungol. Forming in 1972, the band spent nine years crafting their style before finally releasing their debut entitled “Frost And Fire” in 1981. Featuring the screeching demon voiced Tim Baker, Robert Garven on drums, guitarists Greg Lindstrom(who also played bass) and Jerry Fogle, the band took a combination of prog and elements that existed as heavy metal and created a sound that would be a staple for them for years.

1.Frost and Fire-Opening with a very proggy riff with a very hard rock edge to it, the song overall has a very hard late 70’s groove to it especially in the verses with a very galloping pace to it with Tim Baker’s shrieking and actually quite catchy vocals on top. I have always said his vocals are akin to Brian Johnsons of ACDC if you literally strangled his vocal chords. It makes for a very unique sound for the band. The guitar soling I must say is done very nicely and smooth against some hard rocking and grooving riffing that lets the bass shine through a bit. However, the only problem I have always had with this record in particular is that the production feels a bit iffy. Some parts of the song feel more quiet than they should and doesn’t allow some of the instrumentation to pop out quite as nicely. Overall, a fairly good grooving opener.

2.I’m Alive-The proggier side of the band definitely come out more with tracks like this song with the slow slightly brooding opening leading into some very 70’s inspired bluesy soloing. The song quickly turns into a quiet melodic number with Tim Baker preaching over some very and I mean very up front bass, which unfortunately overshadows the guitars at some points as well. However, the band keep together very well with a bouncy catchy chorus included as well. This kind of song would eventually have more of a doom vibe to it with future albums.

3.A Little Fire- This song goes straight for a hard rock groove and is one of the more straight forward tunes in their catalog. However, the production irks me a but here too with some parts sounding louder than they should. However, the song has one of the most grooving solo’s on the album and is definitely a highlight as well.

4.What Does It Take-This song is one I tend to kind of skip over sometimes mainly because of the keyboards within the main riff that feel a bit redundant and feels like their inclusion partially breaks some of the pacing of the album as it gives off a way different vibe. The song although giving more of that “out there” vibe manages to come off feeling a bit stale and more of a sleeper track on the album. I definitely thing the vocals are the overall highlight with a more raspy bluesy groove to them.

5.Edge of a Knife-The main riff to this song has a very bouncy start and stop groove that I dig with some tasty soloing filling the background as well. This is one of my favorites on the album mainly for the guitar work and the simple yet very effective Ramones-esque chorus with Tim Baker doing more of that Doo Wop-ish vocal style that I think weirdly works here. Overall, a more simple yet effective song on the album that is an easy one to get stuck in your head.

6.Better Off Dead-This song has a more Thin Lizzy-ish groove but with some weird time signatures throughout. This song just doesn’t really hit me as it comes off a bit unfocused and not very memorable. Perhaps its the production which is honestly way too bass heavy but either way it just feels a bit bored. When the song picks up it does have a nice solo but again it feels sort of lost in the mix.

7.Maybe That’s Why-I can appreciate this instrumental for being handled as well as the band could do. It does come off repetitive at some points but I really do admire the solo’s throughout. Overall, it is a very laid back instrumental which is decent at best and repetitive at worst.

Overall, I give the bands first outing a shocking 5.5 out of 10. There are some classic songs presented on this album such as the title track and “I’m Alive” as well as some good ideas sprinkled throughout. However, the two biggest problems I have with the first album are the production which you can say is a nitpick considering the time and I assume the money was tight but also the songwriting just feels very unfocused in a lot of spots. You get so many different sounds which can be a good thing but here it just doesn’t flow as well as some of the more solid songwriting on their second album and beyond. Later this week(hopefully if I can stick to a schedule for once) we will be looking at the bands next outing entitled “King Of The Dead”