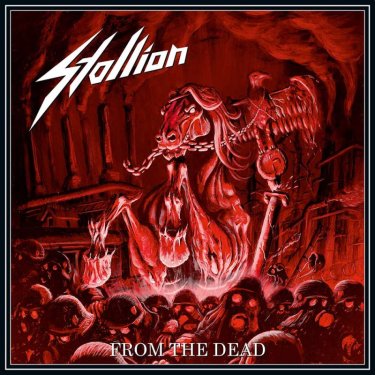 “From The Dead” is the second full length album from Traditional Heavy Metal group Stallion and is to be released June 30th, 2017. Stallion have been slowly on the rise since their mini album “Mounting The World” released in 2013. Since then, they played Keep It True, released their first full length entitled “Rise and Ride” and are gearing up fpr their most ambitious release yet. Personally I have not been extremely familiar with the band but I know from a lot of others that they definitely are a band to check out. So does this band pass with flying colors or do they get mixed with the hundreds of other Traditional Metal bands out today?

1.Underground Society- The opening track on the album and wow, this is honestly one of the openers I have heard all year. The band absolutely rips into this number in absolute classic speed metal fashion with a very echoed production akin to how alot of bands sounded back in the day, and it is done faithfully here. It really captures the raw sound of the band. The vocals are something I have always loved from Stallion as they really have a grit to them but have that classic 80’s traditional metal style which I really like. Overall this opener packs that classic speed metal such as bands like Exciter and done in a faithful and strong way.

2.Down And Out- This song packs more of a mid tempo to it with a really infectious riff and vocals that you can’t help but sing to. It really is a catchy and heavy tune that has become one of my favorites on the album. This is a tune that shows Stallion are bound to get bigger and bigger. The middle of the solo goes more into a frantic tempo showing the capabilities of the band and just how tight they play as well.

3.Hold The Line- This sounds exactly like a tune that Priest never released around 83-84. This is 1005 pure fist pumping heavy metal that could have put Stallion on the top back in the day. These guys would have been huge in the 80’s especially with the power they pack in their songs and their abilities to create big powerful hooks. Overall, this is a simple fun heavy metal tune executed brilliantly.

4.Waiting For A Sign-This tune has a very Dokken “Dream Warriors” feel to it I mean can’t you see this tune in the credits to a Night On Elm Street movie? I can especially with the keyboards that really are an awesome touch, they add more power to the song and are used sparingly during the chorus to give it a bigger sound. This tune even though it has a more 80’s ballad feel packs a lot of power and is one I could listen to over and over. However, around the three minute mark it speeds up into a full speed metal assault. It really catches you off guard but adds a lot more substance to an already fine written song but it just adds an extra layer which I really dig. It does flow back into the more mid paced section of the song and works quite well.

5.From The Dead-I love the acoustic guitar opening to this track it just has a very shimmery and emotional feel to it. The song goes immediately into a break neck speed pace with some cool starts and stops and a lot of different riffs but the  main riff against the verses is just so lethal. The chorus on this track is also one of the best on the album as well. This song has more of a classic thrash feel to it in some areas as well especially in the bridge to the chorus. Easily one of the most epic tracks on the album, definitely worth repeat listens.

6.Kill Fascists-Stallion pulled an SOD here, with a very short song with a tasty riff…all that needs to be said

7.Lord Of The Trenches- The band are yet again on fire with this one and once again proves how these guys would have been huge during the golden age of 1980’s heavy metal with powerful soaring vocals all over the place that could easily get a crowd to sing along to them. In fact Pauly’s vocals honestly are some of the strongest I have heard in years and really push the band over the top.

8.Blackbox-This song has a very NWOBHM sounding riff to it and with the tempo as well. The bridge almost has a frantic hard rock pace to it as well. Overall, this is another strong heavy hitter that is definitely worth multiple listens!

9.Step Aside-This track keeps the album flowing along with the classic speed metal formula in hand however this is definitely one of the fastest tunes on the album with a very Jaguar (i.e speed for speeds sake) feel to it and I really like it, the band just goes as hard as they can here. Another favorite of mine(hell I cant diss one song on this album honestly).

10.Awake The Night-Opening with a more bruding heavy riff going more into a classic mid to fast tempo traditional heavy metal riff, this song possibly is where the band puts most of their progressive tendencies on the album. Their are some more interesting riffs on this tune like in the chorus and some cool melodic moments all throughout as well with the drums doing a lot of different tempo’s. I also like the Manowar ish mid section with the guitars slowing down and the low epic vocals, it just screams epic metal. I also really like how in one section the guitar goes faster and faster with some palm muted strumming like a clock before going into one of the wildest solo’s on the album. This is one hell of a closer on definitely one of the most quality heavy metal albums I have heard all year.

Overall, From The Dead gets a strong, very strong 9 out 10. Like I mentioned how Night Demon got their sound absolutely as close to the vintage NWOBHM sound, Stallion did that with the classic 80’s speed metal sound but adding small influences here and there to make this record entirely faithful and shows a band that is really hungry and definitely knows how to handle the sound they have created. Stallion definitely are one of the top bands on my list especially from this year and are one that proves the future of metal is in the right hands.